I’ve been here 36 hours and seen quite a bit already in a short space of time. There’s a lot to reflect on and I’m having difficulty sleeping at 3am, so will attempt to catch some of my thoughts…..

As the plane pulls into Rangoon with 40 miles to go, I’m watching the approach on the live interactive screen. I can see the mighty Irrawaddy river and patches of farmland and dwellings, scattered then slowly becoming more dense. And of course, you can see the magnificent Shwedagon Pagoda. Visible from every direction across Rangoon and from my aeroplane seat as we come into land. It is 325 feet tall and covered in gold leaf and encrusted with precious jewels at the pinnacle and built more than 2000 years ago.

I’ve been listening to Durutti Column for the past few hours. It’s easy atmospheric music to travel to, soothing to sleep or read to. I ponder again, this would make a good soundtrack for some of the film footage. Looking down on the iPod monitor the tune playing is ‘Another Setting’…. How apt.

Driving from the airport most cars have right hand side steering (including the one I’m sitting in) and they drive on the right! Overnight the law changed in 1970 and required everyone to switch to driving on the right hand side. Most cars are pre – 1970 or newer imported Japanese cars. All have right hand drives making it very perilous on the roads. Yes, best not to give this too much thought.

Motorbikes are also banned in the city and have been in force since 2003. The streets feel less chaotic and I don’t see the throng of people hanging off the back and side of buses. There is a certain air of calmness about the city. Maybe it’s the time of day again…

Local buses vary in type and size many are like those in the photo above, just a small open back pick-up truck with 2 benches running along opposite sides. I’m not sure how payment is made as passengers just hop on and off wherever and whenever they wish!

You will also notice in the photograph the man has his head down on his mobile, a sight familiar on commuter buses (and trains) most of the western world over,  but for Rangoon this is relatively new.

Back in 2013 there were very few people with mobiles and even fewer with internet access. Those that had mobiles or access would have paid extortionate amounts for the privilege. I heard that a sim card pre-2011 could cost $2000 plus. It had come down to about $300 in 2013 and today it’s a very different story and will cost as little as $1.50 and sold everywhere!

It’s good to see some of the old crumbling heritage buildings are being renovated and preserved. There is an organisation called Yangon Heritage Trust and one of its responsibilities, amongst many, include preservation projects. Its chairman is Thant Myint-U who is a historian and the grandson of U Thant, UN Secretary-General from 1961-1971.

Several apartment blocks stand cheek to jowl against fancy new modern hotels and a handful of malls are springing up too.

Some streets are not so dark and unlit at night time anymore. There seems to be more street lighting or perhaps it’s coming from the handful of fancy new buildings, shops and hotels which have sprung up everywhere.

But some things never change…….goats in shop doorways for example? just minding its own business.. 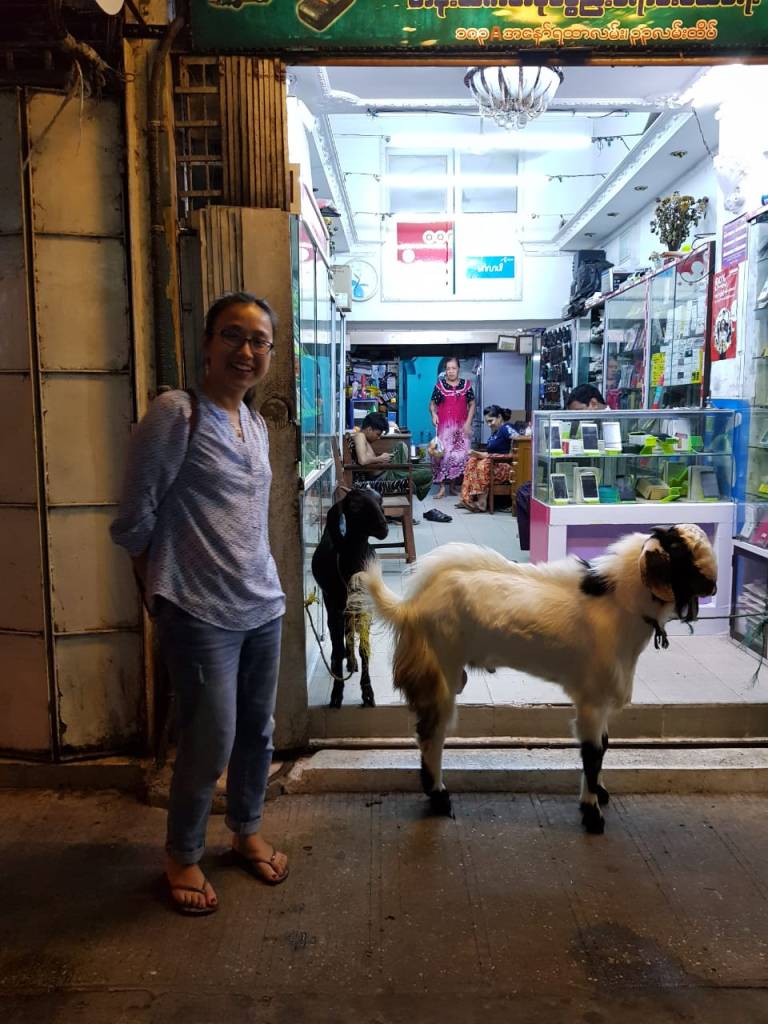 Or a shop selling fridges….? Choose anyone you like…. 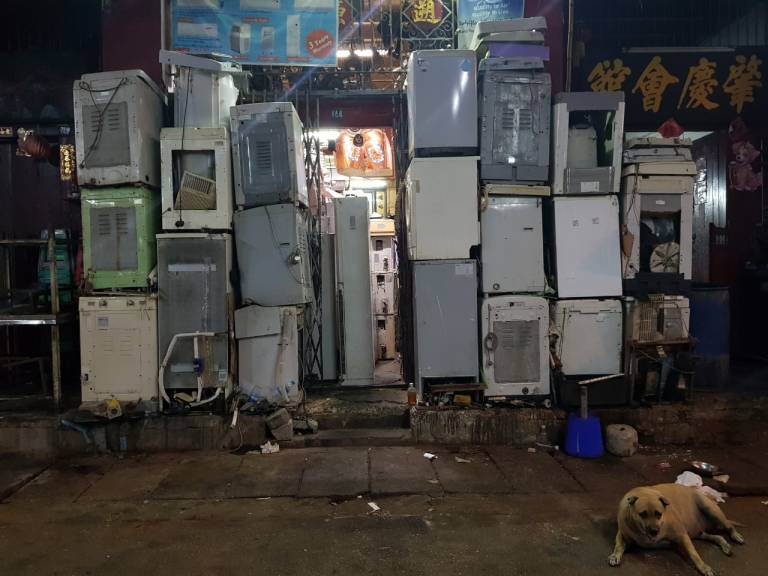 I love this city …think it’s time for bed now…